New, daring literary fiction alert! Courtney Elizabeth Mauk's debut novel is about a woman who takes her pyromaniac brother into her home after he is released from prison, where he spent twenty years for killing a family of four. As she attempts to help him in his rehabilitation, she starts slipping, becoming paranoid about his motives and losing touch with the peaceful life she had created. To find relief, she escapes into a nocturnal New York where the line between reality and dream blurs.


Q&A with the author of SPARK:


BG: Tell us a little about the press that published SPARK and how people can order it:


CEM: SPARK is being published by Engine Books. Victoria Barrett runs the press and does an amazing job. She has made a commitment to publishing no more than four books a year, at least half by women. Working with her has been a revelation. She puts so much attention and energy into each of her titles and produces beautiful books. She also works hard to create a sense of community. The Engine Books authors promote each other, cheer each other on. There's so much goodwill and support. I love being a part of it all. My novel will be released in late September and is available for pre-order now. 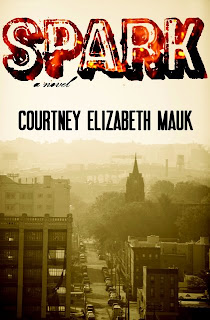 BG: Your protagonist sounds like he might be unsympathetic. For many editors, this seems like it could be a turn-off -- even though some of the most culturally relevant protagonists have been unsympathetic, unreliable, even insane -- from  Holden to Humbert Humbert. What's up with that? I'm personally intrigued by an unsympathetic narrator; I think it's closer to life than the fairy tale stories as educated post-modern thinkers we've been taught to dissect.


CEM: I love unsympathetic, unreliable, insane characters! Really, I think few well-crafted characters are truly unsympathetic. They may do things that the reader does not approve of, or finds disturbing, but a skilled writer is able to evoke the reader's empathy anyway. The reader has to be willing to go on the journey with the character, though, and some readers don't like being taken outside their comfort zone. I do. I agree with you that these "unsympathetic" characters are closer to real life. We're all flawed; we all have good and bad sides. That complexity is what I find interesting.


BG: One of my favorite protagonists, Meursault from The Stranger is known for his cold, indifference to the world, yet The Stranger is a book that grows more and more beautiful each time I read it. I was thinking about Meursault in reference to SPARK. I've come to realize that Meursault is not a composite character, but there are shades of him in the human experience. Is this how you feel about the characters in SPARK?


CEM: Yes, definitely. Delphie, the pyromaniac, gets in trouble for giving in to his impulses. He then must work hard to shut out those impulses, to reprogram himself. He has to change so that he doesn't do any more harm, yet he loses an essential part of who he is. It's sad. His story is an extreme example of something everyone deals with. We all have desires that might not be "good" for us, some of which we control, others we do not. Our impulses can hurt others and ourselves, but they also can lead to amazing experiences, to living a full, self-actualized life. It's a push and pull as we negotiate society. How much of ourselves do we let come out? What aspects have we suppressed for so long, we can't even access them anymore? And what happens when those suppressed impulses break through?


BG: How does landscape play a role in your novel? Not just physical landscape, but the cultural landscape in which the novel is set?

People talk a lot about "how New York used to be" - grittier, more dangerous, more free. There's a sense that something has been lost, some sort of truth. Everywhere seems to be gentrifying. I explore this change in SPARK and turn it on its head. Maybe the surface of the city has become better groomed, but New York has not lost its dark impulses. It's a very human place.

BG: As a writer, what's your practice? Do you write everyday or are you a binge writer?


CEM: I try to write every day. I don't stick to an exact schedule, but I tend to do my best work in the morning and early afternoon. I set myself a word count goal, usually 500 or 1000 words depending on what else is going on. I usually exceed that, but I set my count intentionally low for me so that I can feel good about going past it. Little tricks like that can really help. If I don't write, I become anxious. I need my time alone with my imagination.


BG: You've got an MFA in fiction from one of the most prestigious (and expensive) programs out there. While there are fellowships available at a place like Columbia, they are uber-competitive and far and few between. To an aspiring writer who wants to pursue an MFA, what advice would you offer?

I'm glad I got my MFA, and Columbia was a good choice for me (partially because it got me to New York). The degree has enabled me to teach, and I made many good friends in the program who are still my best readers. But I don't think an MFA is required to strengthen your writing or have a writing career. There are many wonderful private and community workshops (like Sackett Street, where I teach) and informal writing groups that can be just as helpful. One thing my friends and I often talk about is how we wish we'd been better prepared for the realities of a writing life. My program taught me very little about the business side of things - rejection, contracts, book promotion, juggling priorities, paying the rent. I learned what I know from being out in the trenches, which is probably the best way to learn. Still, more discussion of the practicalities would have been nice. I would advise aspiring writers to think long and hard about why they want to pursue an MFA. Do they want to teach? Work with a particular writer? Spend a few years away from the "real world?" All of these are valid reasons, but if you don't have a clear sense of what you want to get out of an MFA, you probably shouldn't do it. The cost should be considered carefully, too. Writing is very rarely a high paying career path, so the debt will most likely be carried for a long time.


Thanks, Courtney. I can't wait to read SPARK! xoxo

Posted by Beautiful Garbage at 10:03 AM