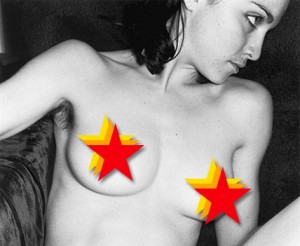 Someone bumped me and I spilled champagne down the front of my dress.

"Beasts in here," said Vincent Frand, dabbing my chest with a napkin. "That's putting it mildly. This 80s downtown art scene of ours is a miraculous disaster. But you..." he paused to take a drink. "You," he began again emphatically. "You just have to be a part of it. Don'r you?"

"The whole star bit -- I'm not playing into that."

"Oh no?"
Posted by Beautiful Garbage at 5:32 PM No comments:


BG: How did you raise money?

LR: Ah yes. That is always the quandary. Fundraising is one of the most difficult aspects of any venture, but this is was mostly a passion project, meaning that it was largely self-funded by the writer/director and a small, focused group of investors/donors. Fundraising for a short film is a tricky business because it is unlikely to generate much of a revenue stream which makes it a hard pitch to investors. Our plans for this film was for it to take the festival route as a short film entry, which nonprofit donors can find very intriguing and a great project to be a part of.  We also held a small fundraising open bar party with a raffle a few months before the shoot so we could drum up some support for the film which helped us cover some initial start up costs. 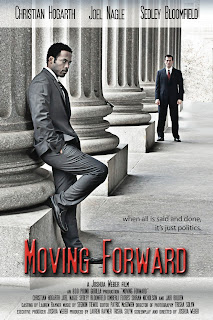 BG: Tell me about the story of Moving Forward. Do you think in light of the Occupy Wall Street grassroots phenomenon, Moving Forward will especially resonate with audiences?

LR: In a nutshell, Moving Forward is about bringing political corruption down from within. After years of playing by the rules and getting nowhere, Thomas Adder is about to make a name for himself overnight. Four years ago as young, ambitious strategist at the forefront of a winning New York City gubernatorial campaign, Thomas believed he was working to elect a man that wanted to change the face of the city he loved. All too soon he realized he was wrong. Following the triumphant campaign for Reese Jennings, Thomas was given a swift pat on the back before being cast aside with knowledge that in the political world you are either working to fight corruption or part of the problem. Thomas chose to leave the team and now, four years later, he will face the newly re-elected Governor, he has come to despise. With renewed vigor, Thomas is the only man that still believes in their original campaign slogan, “Moving forward to make a difference,” and is willing to do whatever it takes to remove the corrupt Governor from office.

This film will definitely resonate with audiences, especially during these turbulent political times. It does not subscribe to any particular political party; we really tried to leave that part ambiguous and make the story very character driven rather than promoting a specific political agenda. The film is a character study about right and wrong. It's right to bring this Governor down, but by the time the main character Thomas figures out how to do it ... well, has he grown just as evil as the man he has in his sights to take down? That will be for the audience to decide!

BG: Did you feel that as a woman you experienced any obstacles in the film making process or do you feel certain female gender qualities enhanced your experience as a filmmaker?
LR: I don't think I faced any particular obstacle that I wouldn't have already faced as a woman in everyday life anyway. Although, I will say, except for the two actresses, Trisha (director of photography/producer) and me made up the only females on set. I do not wish to make any generalizations, but the film industry is still very much so a male-dominated one with men writing and producing most more than two-thirds of the major films released today. However, independent film is so different. The team usually really knows and trusts each other (because in NYC the film world is much smaller than LA) and many of the people have all worked on many shoots together before! At least this was my experience with the team for Moving Forward; and it was a great one.


BG: Your production company, Lauren Rayner Productions, states in its mission, that "Narratives can be created out of anything: stage, film, dance, music, web-design, visual art, and any combination thereof. These art forms are innovative and they are genreless; these stories are linear and they are emotional."I feel like that versatility/flexibility is totally in sync with our postmodern catering economy. So, what's next for your production company?

LR: Next up, I am on the producing team for DELUSION a new feature by TreeFa Films about a struggling actor who gets into the underground world of massage and ends up in Budapest (we're still in pre-production and shot some preliminary scenes in May 2011). Also, I will be fundraising throughout November for a short film directed by Jeremiah Kipp called The Days God Slept, an ethereal, almost dream-like piece set mostly in a strip club. Looking forward to location scouting for that!

Posted by Beautiful Garbage at 7:52 PM No comments: