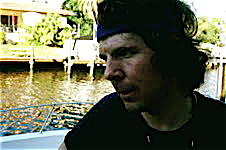 As a nod to the auteur, indie film director Jeremiah Kipp keeps it real: (I resisted the reel pun, people) real ethereal and eerie, often making audiences uncomfortable with the juxtaposition of beauty and horror in his films. Unlike the slasher genre that sells tickets with misogyny, Kipp's films glorify the sexy, powerful, and disturbing side of women. Even his A/X commercial captures this aesthetic.

How would you identify yourself primarily—as a director? And if so, what’s your genre? How would you describe it?
I’ve passed through a long apprenticeship as an assistant director on various feature films, while at the same time directing my own projects on the side. Over the past two years, I’ve strongly identified myself as a director and haven’t looked back. As for genre, it’s a little nebulous. I get inspired by guys like photographer Gregory Crewdson, painter Edvard Munch or fashion designer Alexander McQueen, who have a toe dipped in the horror genre, with elements of the fantastic or macabre—but their work is also aesthetically beautiful.

Tell me about your most recent films. What is the aesthetic you’re going for?
For me, the recent films start with CONTACT in 2009, which kicked off a series of collaborations with my director of photography and good friend Dominick Sivilli.  That was an attempt for us to pare filmmaking back to the very essential, stripping away plot, character, even color, so what was left would be, we hoped, pure cinema. I was going through a very lonely time in my life, and wanted to make a movie about relationships and the fear of connection—ending in a grotesque image where the people kiss and their faces fuse together.  It takes an idea of getting too close to someone, and makes that literal.

CONTACT was a stepping stone that allowed us to tap into the melancholia of CRESTFALLEN (a film about suicide), which we shot in widescreen (2:55 aspect ratio)—we wanted to make it seem huge, because when we fall in love or hate or despair, everything seems more epic and fantastic.  In our first feature film, THE SADIST, a work-for-hire project, we took the typical “killer in the woods” scenario and tried to shoot every scene as if we were running a gauntlet, in a hyper-aggressive and energetic way.  Dom and I wanted to move from these quiet chamber piece short films into something that felt like a spectacle even on our threadbare budget—where we were setting cars on fire, smashing trailers into pulp with back hoes, and pushing all our actors as far as they could go. The producers are re-cutting the film right now, so we’ll see how it all turns out…

It seems your heroines are dark, sexy, and kind of fucked up women. What’s up with that, and what’s the appeal of this type of character?
It’s probably because I’m interested in characters who take it to the limit, and women often seem more emotionally available than men; you can’t really picture John Wayne or Woody Allen walking the razor’s edge so closely. I also like working with women, and it’s less interesting for them to play the good girl holding the hand of the hero and passively following him on the adventure.  I’ve been fortunate to work with actresses that are willing to go for it—and they deserve all the credit. Zoë Daelman Chlanda in CONTACT, Deneen Melody in CRESTFALLEN, Laura Lona in DROOL and Mackenzie Christine Hawkins in THE SADIST, to name just a few, were truly inspired and charismatic performers, willing to tap into their dark, fearful and obsessive emotions. It’s worth pointing out that after we complete shooting, there’s a sense of catharsis and accomplishment they (and I) go through.  It doesn’t feel sinister at all; it feels jubilant and exciting.


I wish more women filmmakers were telling stories about disturbed female characters…they have far more to say about it than I do. I recently produced a film called IN MONTAUK for a talented filmmaker named Kim Cummings whose central character has to choose between her art and motherhood, and I think this came from the fact that when Kim had children she had to put her filmmaking career on hold for five years right around the time she was making a name for herself. Women have to go through trials that men, myself included, cannot possibly fathom.

How do you get what you want from an actor/actress?
Sometimes I make them jump up and down and scream at them to lift up their knees until they touch the ceiling—then throw them into the scene.  Other times, I’ll have the actor voice out the subtext until they’re exhausted—then throw them into the scene.  When we’re not doing those physical rehearsals, I tend to go for simple playable actions like, “You’re trying to get her to leave the room” or “You want to twist the knife in him.”  I’ve also worked with child actors where we play “as if” games such as, “Play this scene as if you’re seasick” and it produces a unique effect.  Beyond that, I try to get as much rehearsal as possible so when we arrive on set, the performer is able to leap into any situation and play it.

Because of the troubled times we’re living in, do you think people want to watch films that are fantastical, i.e. transportive, or that reflect the struggles and trauma that we’re going through ourselves?
Audiences aren’t interested in characters per se; they’re interested in themselves. They project so much onto the films they watch, and somehow pick a character to identify with even if they don’t necessarily like the movie. We plug into movies and inevitably bring our own baggage to them. When I made THE CHRISTMAS PARTY, a film about a little boy going to a holiday party run by Christians, the kind who want everyone else to be Christian too, it had a very successful festival run. Audiences around the world interpreted it differently. In New England, they considered the film social realism; on the West Coast they hailed it as a horror movie; in France they interpreted it as a satire on American “Norman Rockwell” values. Christian film festivals viewed it as a cautionary tale.  All of these are correct, because once a film is completed, it no longer belongs to me—it belongs to them.

As a filmmaker, how does our cultural context impact the material you take on?
It’s inevitable to be influenced by where we are culturally; I don’t think it can be helped.  But I’m also influenced by looking at paintings, reading the newspaper, people watching—it all feeds one’s inspiration.

What’s your latest project?  I know you’re trying to get funding for something, so perhaps talk about how people can contribute—or how your films get funded.
A friend of mine named Joe Fiorillo wrote a surreal short film called THE DAYS GOD SLEPT, which is a kind of quasi-religious meditation about men and women, and takes place in an unusual gentleman’s club.  That sounds awfully pretentious, but Joe’s writing taps into a kind of dreamlike raw nerve about the sexes.  I’m happy to say the fundraising campaign for the project, run by our producer Lauren Rayner, was a total success; they secured the entire budget through getting the word out through social media and highlighting its more sensational elements.  Every project gets funded in a different way.
CRESTFALLEN was produced by a guy who saw and loved CONTACT; THE SADIST was a job financed entirely by two Connecticut producers who had never made a movie before.  Lately I’ve been making movies with a performance art group called The Mandragoras Project which have been doing small experimental films as art for art’s sake, and enjoyed doing a movie called DROOL with them that was made with their few resources and a lot of creativity. Laura Lona, who runs Mandragoras, gave us total support and artistic freedom. If anyone wants to pay for another short film, I’d love to do a 60-second version of CONTACT that would feel more like a hand grenade of kinetic energy.  And I’m speaking with a producer right now about putting together my second feature, which would be a monster movie.  I like to work, and feel like work begets work.

Posted by Beautiful Garbage at 8:46 AM